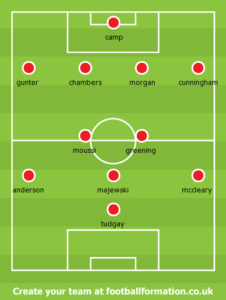 I really don’t have the motivation to go through this in depth – another game where we had the better of the play, but our final ball and/or shot let us down.  Admittedly there was an improvement on the Brighton game in that the visiting ‘keeper had a few saves to make – one of them excellent.  Then again, Camp wasn’t untested prior to eventually conceding.

So here’s how it all started for us…

An unchanged line-up from last weekend, which was forced into a crazy level of make-shift-ness when Wes Morgan picked up an injury.  Bizarrely we probably had our best spell with ten men, before Andy Reid was introduced and Moussi moved to cover centreback.

Zaha (who was lucky to be on the pitch for me, after diving, kicking the ball away and a foul all of which warranted a card) turned Cunningham too easily, burst forward whilst our entire defence seemed to back-pedal and not close down, simultaneously ignoring the run from Murray to his right.  Zaha picked out the pass, and t’was a nice finish by Murray to put Palace in front just shy of the hour.

Forest laboured and worked hard but constantly came up short as we’ve seen of late – this worries me on many levels.  Just as the mark of a good team is one that plays badly and gets a result, we are a team that plays well – against, with all due respect to Palace, a not exactly good team yet comes up with nothing at all.  That is not a positive thing, and as a supporter of a team that has been relegated a fair few times, it’s a worryingly familiar trait.

Perhaps the one highlight of the afternoon aside from some promising yet ultimately toothless build-up play was the return of Dexter Blackstock, introduced as a late sub he got a fantastic reception from the City Ground crowd – and perhaps could’ve done better with a headed chance put directly at Speroni.  That and Greening’s inexplicable lunge off the pitch at a Palace player which he was lucky to just get booked for.

It wasn’t a bad performance, but we are in the results business now more than ever – and this is a fourth straight defeat.  Indeed, Steve Cotterill has now managed more defeats than Steve McClaren – and done so in one game fewer.  Not having defensive cover on the bench is something he’s answerable for – that said, Moussi deputised well at the back I thought – it appeared to be a combination of Cunningham initially and then Chambers I’d fault for the goal.

A tricky trip to Bristol, then free-scoring (and hopefully free-conceding) Peterborough at home, followed by Cardiff at home… who can see where the points are going to come from there?  That takes us to January, the month of transfer droughts for Forest traditionally – I think that trend changing rather dramatically is our only hope of salvation this season…