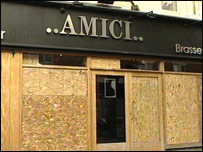 There were scuffles before the game, unsurprisingly when nearly 5,000 away fans come to town without adequate arrangements made about exactly what to do with them before the game – but it wasn’t until after that a full-blown riot kicked off on Radcliffe Road between the respective meat-heads from Forest and Bristol, leaving the Amici wine bar trashed inside and out, and a police horse injured.

So far there have been three southerners have been charged with violent disorder and criminal damage, from Somerset, Avon and Wiltshire – the youngest of whom was only 17.  CCTV of the incident is highly likely to yield more arrests over the coming days.  It reportedly took police between 10 and 15 minutes to actually arrive on the scene of the violence, leaving terrified regular supporters faced with trying to pass the affray or negotiate a different route to their destination.

“This is a serious matter and we have a full-scale investigation underway to identify all those involved.

It’s a shame for the bulk of the Bristol fans to be tarred with this, as whilst they were very vocal and demonstrative, most fans are and it doesn’t always lead to disgusting scenes of violence.  Certainly it has highlighted a few deficits in the policing of games, and with Millwall yet to visit the City Ground it would be worthwhile them reviewing the policing strategy to deal with incidents like this – as it wasn’t good enough this time around.

A couple of (unclear) video clips on YouTube have appeared already, click to read the full article below should you wish to watch (before they delete them, anyway!) – I found these videos, I didn’t record them.