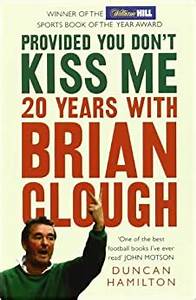 Given the current state of play this season, it’s probably not the best time to be dwelling in the past.  But when Al Needham from Left Lion alerted me to Duncan Hamilton’s new book, Provided you don’t kiss me, about his time as a sports journalist working so closely with Brian Clough at Forest, I very quickly enlisted my missus’s expert knowledge of the workings of WH Smith’s discount vouchers and despatched her to avail me of a copy of it.  The fact I’ve been less prolific at writing online during this time is probably testimony to the ‘not putdownable’ qualities the book has.

Like all Forest fans, I’m quite fiercely defensive of Clough.  Whilst only a fool would not concede that the great man certainly had significant faults and troubles – particularly during the era that I was first ushered into the ranks of Forest fans by my father and brother in the late eighties – he has been a constant and reassuring part of our history.  You could argue he is our history.  When I see fans of other teams say “you shouldn’t be in this league” for example, we can thank Brian Clough for that – because before him, we wouldn’t have been remotely out of place.

So I was suspicious of this journalist.  His name was familiar to me because of his presence in the local media during Clough’s tenure as manager – but the cynic in me naturally worried at the emergence of this book after Brian had shuffled off this mortal coil.  Was it to prove an insightful work, or just an exercise in cashing in on his memory which still proves lucrative in column inches or media coverage well beyond his retirement, and re-energised post-humously as plans to unveil a statue in Middlesbrough of Clough the player are imminent, and one of Clough the manager in Nottingham will not be too far behind.

I needn’t have worried unduly, as Hamilton presents a first-person account of his time building a relationship with Clough, with insight not only around his time at Forest, but those moments in his life that helped to shape the man he was to become.  A complex character, we’re all aware of that, is dealt with very candidly by Hamilton, he doesn’t pull any punches which I suppose is made easier when the subject is no longer able to answer for himself.  Whilst Clough’s latest autobiography was mostly honest, sometimes it does take an external perspective to try to get the flavour of a character.

The rift between himself and Peter Taylor is something that the surface had only been scraped from in previous commentary – it was heart-wrenching to read of how perhaps, had Taylor been in his office after Derby had beaten Forest 2-0 at the Baseball Ground, there may have been a small step made towards reconcilliation between the once great friends.  I never knew that before.  I’m completely with Hamilton when he states, in no uncertain terms when commenting on the Brian Clough stand, that “There is – disgracefully – nothing comparable to mark Peter Taylor’s contribution to the club’s successes.”

In attaining such a relationship of trust with Clough, and spending so much time with him, Hamilton has been able to introduce much of the inner-workings of him, or at least his interpretation of them, that perhaps have been surrounded in mythology before.  In witnessing him arrive at Forest in all his pomp, to becoming the parody image of himself – collapsed beneath mounting pressure and alcholism – he illustrates starkly what started to go wrong for him, and the tragic thing is, some of it could have been repaired much earlier.

So I would certainly put my seal of approval on this book – it had me laughing, it had tears pricking on occasions and most of all it had me enthralled with a subject that I thought I was – whilst not expert – at least well versed in.  The tone and feeling in the words do not smack of a cynical journalist cashing in on his good fortune, but rather a man eager to put across a portrayal of this football giant that he feels accurately represents the man he spent twenty years getting to know.  Highly highly recommended by this reader.